To Have and to … Quarantine? Getting Married During a Pandemic Why do I say this? Because the Church is simultaneously gifted with Our Lord’s authority (Luke 10:16

) and protected from teaching error (Matthew 16:18

) on one hand and filled with sinful people who need salvation on the other. So when the Church teaches and we dislike the teaching, or if we get scandalized by the bad behavior of some churchmen, the only thing that will keep us on the right path is faith that God protects His Church. If we treat our affiliation with the Church like a political affiliation, what will we do when the Church goes in a direction we don’t like? 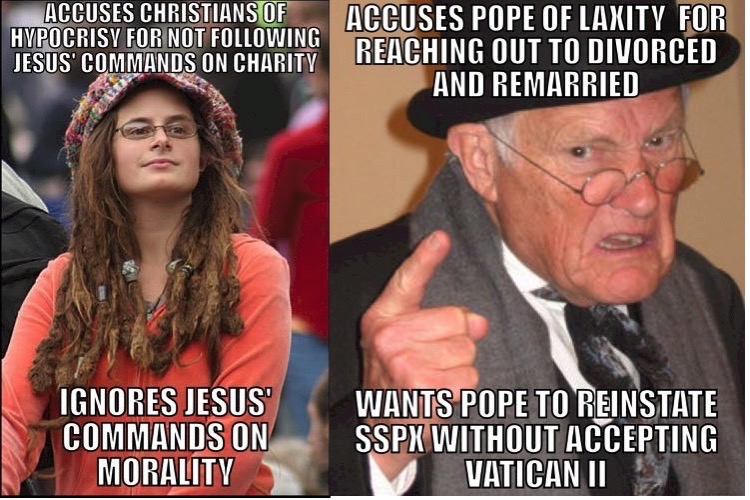 In the West, attacks on Christians begin over teachings against popular vices. Foes portray Christian opposition to moral wrongs as hating the people who commit them. Then they accuse Christians of violating an esteemed cultural value out of bad will. These accusations justify laws (or, more commonly, executive action and court rulings) against the alleged wrongdoing of Christians. When Christians insist on obeying their faith despite unjust laws, foes harass them by Criminal and Civil complaints aimed at forcing compliance.

Political and cultural elites argue that the injustice is just a consequence of Christians doing wrong. If they would abandon their “bigotry,” they would not face legal harassment. The problem is, they accuse us of wrongdoing, but we are not guilty of wrongdoing. We deny that we base our moral beliefs on the hatred of people who do what we profess is wrong. They must prove their accusation. People cannot simply assume it is true.

When people attack the Catholic Church and her teaching on morality, they point to laws in past eras that were brutal by our standards. They argue that these past laws show that the teaching that “X is a sin” caused brutal punishments. That presumes law and morality are the same, which is false. Not all sins are against the law, and sometimes law interferes with moral behavior. St. Thomas Aquinas makes this distinction:

Now human law is framed for a number of human beings, the majority of whom are not perfect in virtue. Wherefore human laws do not forbid all vices, from which the virtuous abstain, but only the more grievous vices, from which it is possible for the majority to abstain; and chiefly those that are to the hurt of others, without the prohibition of which human society could not be maintained: thus human law prohibits murder, theft and suchlike.

In other words, Not every sin was against the law in Christian societies. Morality distinguishes between right and wrong behavior. Morality tells what we must do or must not do regardless of what the law says. If theft is wrong, then we must not steal even if the law allows it. But while morality deals with what we must or must not do, law deals with what penalty we give when people violate morality in such a way that harms human society. Morality does not change over time, but laws can change over time.

Those who think the Pope’s emphasis on mercy supports laxity—whether critics or people who wrongly hope for change of teaching—misunderstand what mercy is. I find that Bishop Robert Barron has a good response, rejecting that view:

Many receive the message of divine mercy as tantamount to a denial of the reality of sin, as though sin no longer matters. But just the contrary is the case. To speak of mercy is to be intensely aware of sin and its peculiar form of destructiveness.

That’s a serious matter. The person for whom membership in the Catholic Church is important, must justify rejecting the authority of the Pope and bishops in communion with him by arguing that he is not in opposition to the Church. Rather he is being faithful in larger matters. The people who do this have different motivations and political leanings. Some try to argue that the Church teaching is harsher than Our Lord ever intended and this justifies disobedience. But others claim that they follow the Catholic teaching as it was always practiced, claiming that the Church fell into error beginning with St. John XXIII and will be in error until the Church rejects Vatican II and all the changes which followed. This is the position of Radical Traditionalism.

I find myself shaking my head in disbelief when I come across people who write off Catholic teaching with some variant of “that’s just your opinion.” I shake my head because rationally that means we can write off their views of right and wrong on the same grounds. If one rejects a Christian’s arguments on these grounds, one can reject the arguments of an atheist on the same grounds. Under those assumptions, we can’t find truth about anything and we can only use legal or physical force to compel anyone to accept something. It’s ironic that people who claim to champion reason and enlightenment should promote a throwback to “Do what I say or I will bash you with my club!”

It’s not surprising that people believe this tripe. I recall a teacher in High School once give us a couplet: “Opinions are never right or wrong. Opinions are only weak or strong.“ The couplet confuses “opinion” with “preference” or “feeling,” leading to people thinking that a religious view on abortion is no different than a preference for a flavor of ice cream. Many dictionaries give that interpretation to opinion as well. But that is only one of the meanings.

An opinion on matters of right and wrong, as Merriam-Webster describes it, “implies a conclusion thought out yet open to dispute.” This means that the value of the opinion depends on how it matches reality.

In recent days, we’ve seen Bruce Springsteen, Brian Adams and Ringo Starr cancel concerts in states which have religious freedom laws. The argument used is that they object to intolerance (or a similar descriptor) in the law and will not give concerts there so long as these laws exist. Putting aside any questions of sincerity [*] some have raised, what we have is a moral argument. These musicians believe that something is morally wrong and refuse to play where people could misinterpret their actions as supporting something they believe is morally wrong.

But their action is ironic. The laws they protest are laws aimed at blocking legal action targeting Christians for refusing to take part in something they think morally wrong. In other words, sincere or not, to oppose religious freedom laws they appeal to the same moral argument that these laws protect. That leads us to the problem: Why are these laws seen as necessary? Because recent laws and judicial activism refuse to accept the right of religion to conscientious objection. Activist judges and lawmakers claim moral obligation in religion is discrimination against people who reject moral obligation in religion. Such actions result in governments dictating to the Church what religious beliefs they can hold.