77 Ways to Pray With Your Kids

I am currently working with Peanut Butter & Grace publishing on several projects and have been enjoying this title extensively with my own family.   PB & Grace is a newish publishing company dedicated to family-based catechesis.  There is always more for kids and adults to learn about the rich treasures of our Catholic faith and what better way to learn than together?

Subscribe to the Weekly Family Formation Newsletter, The Bread.

Read my full review of this title and enter to win a copy this week only on Work and Play, Day by Day.

Ladies and Gentlemen, this is the day! Happy Feast of Our Lady of Mt. Carmel. Trusting God with St. Therese is now available on Amazon for the Kindle and in print.  For the time being (at least the next 90 days) the ebook will be exclusive to Amazon. However, the paperback should be available soon at Barnes and Noble and other online retailers. I hope to see it in some Catholic bookstores as well. And those of you who are local or who know me personally are always welcome to purchase the paperback directly from me as well.

The last 14 months writing and publishing this book have been busy but rewarding. I pray you will find them rewarding for you too. I really believe it will help almost everyone but those very advanced in the spiritual life to come closer to Christ.

Now for the fun stuff!

Visit Contemplative Homeschool to enter the contest and see the other contests and events marking the release of  Trusting God with St. Therese.

Do you think you have little in common with St. Therese? Think again.

If I’ve learned anything in writing Trusting God with St. Therese, it’s how much Therese’s struggles were like mine. Consider these points:
Therese was born weakened by Original Sin.It took her years of grace and hard work to overcome family tragedy.She had difficulties relating to other children at school.She suffered from scruples. God repeatedly made her wait for things she believed were His will.Her family members misunderstood her spirituality.She felt natural aversion to people with difficult personalities.She feared losing her remaining loved ones.Spiritual darkness and dryness in prayer were her norm.Great deeds for God were beyond her capability.She suffered terrible pain.She was tempted to despair.Now tell me that none of those sound like you.

Therese believed in the same God you do. He was her strength and her righteousness. He can be yours as well. 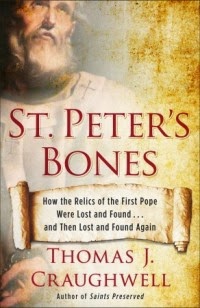 This week over at The Catholic Book Blogger I featured Thomas Craughwell’s latest book St. Peter’s Bones : How the Relics of the First Pope were Lost and Found… and than Lost and Found Again. This was an incredible read that I highly recommend. Below are links to the various articles I posted on it.

And last but not least enter to win a copy of St. Peter’s Bones here.

Writing Trusting God with St. Therese, I have purchased or checked out from the library several book about the saint that I had not read before. I have also revisited some old favorites. There are countless books about Therese, but not all are of the same quality or focus. Here are some of my favorites, in brief. Throughout this year, I hope to give you more detailed critiques of them and others.

I Believe in LoveI Believe in Love: A Personal Retreat Based on the Teaching of St. Therese of Lisieux by Fr. Jean C. J. d’Elbee is by far my favorite book on Therese. In fact, it’s one of my favorite books of all time. I have given this book away twice before. I just received it for Christmas for the third time and am rereading it.

The point that struck me most on my last reading was that we shouldn’t say, “I’m striving to love God.” Instead, we should simply say, “I love God.” Love is a matter of the will. If we truly will to love, we achieve love.

Read the rest of the list at Contemplative Homeshcool. 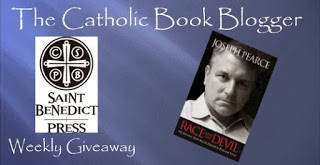 This week at The Catholic Book Blogger I featured the latest book by Joseph Pearce, Race with the Devil : My Journey from Racial Hatred to Rational Love . You can find my review of the book here. I also had the pleasure of interviewing Joseph and that interview can be found here. Lastly publisher Saint Benedict Press is sponsoring my weekly giveaway with a copy of Race With the Devil. Enter here. Shane Schaetzel is a Catholic convert from Evangelical Protestantism through Anglicanism.  Schaetzel writes the thoughtful CatholicintheOzarks.com blog as part of his lay ministry to spread the Good News through the written word.  Catholicism for Protestants (2013. Lulu)  draws upon his faith history, his love of language and history along with his religious education to answer some challenging spiritual queries that he has heard living in the buckle of the Bible Belt.  Schaetzel also sees Catholicism for Protestants to be a good primer for all Catholics on the fundamentals of the faith.

Schaetzel starts the book with his compelling personal faith history which underlies the material. But in an effort to show that there are many different kinds of Catholics, like there are many different kinds of Protestants, Schaetzel wrote: “There are: Roman Catholics, Byzantine Catholics, Maronite Catholics, Franciscans, Benedictines, Carmelites, and even Anglican Use Catholics”.  This conflates Churches (Roman, Maronite and “Byzantine” branch), with religious orders (Franciscan, Benedictines). Later, Schaeztel teaches that there are 23 rites in the Catholic Church.  It may be minor distinction but that is incorrect.  There are 23 Churches  which comprise Catholicism.  A Church may have several different rites.  For example, the Roman Church currently has the Roman rite, the Ambrosian (around Milan, Italy) and the Mozarabic (at several parishes in Toledo Spain).   Some might argue that Anglican Use is a rite, but for now it is part of a Personal Ordinariate established by Pope (Emeritus) Benedict XVI to reach out to High Church Anglican and reincorporate the richness of traditional English Patrimony in the Roman Church. For those unfamiliar with these concepts, proclaiming yourself as a Roman Catholic layman of the Anglican Use could be kind of confusing as opposed to boldly proclaiming the author’s  point of view.

Most of Catholicism for Protestants is structured in a question and answer format which is eminently readable.  This cradle Catholic was able to finish the short 100 page book in one sitting.  Schaetzel does try to answer many common questions Evangelical Protestants have about the Catholic faith.  This sort of apologetic can be challenging as Evangelicals come from a non-sacramental, non-liturgical and non-ritualistic practice of faith so Catholicism’s practices and even its vocabulary can be confusing.  While Schaetzel’s scholarship is evident in the presentation and the supplemental footnotes (pointing to scripture, Church Fathers, the Catechism and some fine contemporary Catholic scripture scholars), his prose does not get bogged down by too much high church jargon.

Shane Schaetzel has done a good job at authoring an engaging and enlightening apologetic aimed at answering Protestant’s common questions about the Catholic faith.  Moreover, the author is practicing his understanding of the faith by his publishing and dissemination method by employing distributism, which favor small mom and pop religious bookstores.

Being in an inter-faith marriage, I often am prompted to explain parts of my faith to my curious in-laws.  They seem to admire my pursuit of being a good Catholic but sometimes wonder why I am spiritually compelled to do what I do.  Shane Schaetzel’s Catholicism for Protestants will not only offer a clear Catechism but will also give the chapter and verse citations which sola scriptura Christians tend to seek.

This week I had the pleasure of kicking off Image Catholic Books Virtual Book Tour for their latest release Walking With Mary : A Biblical Journey from Nazareth to the Cross written by Dr. Edward Sri. The book was fantastic and if you are looking for an easy to read, deep exploration of Mary’s faith journey I highly recommend you get this book. You can find my review here. Also click here for your chance to enter my weekly giveaway, a copy of this great book.
Pete Socks
The Catholic Book Blogger