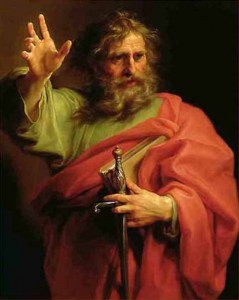 As Paul went on and on, a young man called Eutychus who was sitting on the window-sill grew drowsy and was overcome by sleep and fell to the ground three floors below.
Acts 20:9
If Eutychus isn’t the patron saint of ordinary churchgoers then perhaps he should be. On days when the sky is blue, the sun is warm, the sermon is dull and a tall glass of something cool is waiting for you outside then who is the one whose attention would not waver at least a little? I don’t think that this is a cautionary tale (spoiler alert: it has a happy ending) its more an observation that even in the presence of the famous Apostle to the Gentiles human flesh is weak. If it were not there would have been no need for the Incarnation.
There are many positive arguments that can be made in favour of churchgoing but Eutychus I think points us towards a negative one. Church services can be dull or worse than dull. And that’s not necessarily a bad thing. The temptation to think that the Church can pretend to be a part of the entertainment industry is something that should be firmly resisted….click here to read more

Pope Francis invites us to read Ezekiel chapter 37 which describes the Spirit of God breathing life into a Valley of Dry Bones. Francis always emphasizes that God is in charge and in control of the Church, not man. In Ezekiel, it is God who, through the prophet, sends the Spirit upon the skeletons. Ezekiel humbly admits he doesn’t know what God’s plan is. Similarly, it is God Himself who breathes His life into the Body, the Church.
Francis explained that”the vision of Prophet Ezechiel, in which God’s Spirit gives flesh and life to a field of dry bones, is a foreshadowing of the Church, filled with the Spirit’s gift of new life in Christ and united in fellowship and love.”

In addition, it is important to notice God sends Ezekiel in the midst of a rebellious house of the exiled Israelites. The dry bones are Israel, cut off from the of life God. By zeroing in on this scene of the Valley of Dry Bones, the pope makes a parallel connection with individual members of the modern Church who act like the rebellious house of Israel, “with the experience of division, of jealousies, of misunderstandings and marginalizations”. He said this “dismembers us” and moreover is the beginning of a war. “War does not begin on the battlefield: war, wars begin in the heart, with this misunderstanding, division, envy, with this fighting among each other”.
continue reading>