Agincourt, Imagination and the Bible 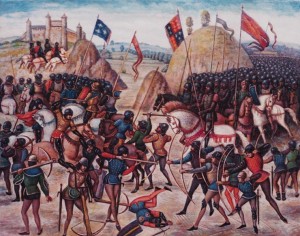 Then he took the twelve apostles aside, and warned them, Now we are going up to Jerusalem, and all that has been written by the prophets about the Son of Man is to be accomplished.  He will be given up to the Gentiles, and mocked, and beaten, and spat upon; they will scourge him, and then they will kill him; but on the third day he will rise again. They could make nothing of all this; his meaning was hidden from them, so that they could not understand what he said.
Luke 18:31-34

King of France
With pennons painted in the blood of Harfleur:
Rush on his host, as doth the melted snow
Upon the valleys, whose low vassal seat
The Alps doth spit and void his rheum upon:
Go down upon him, you have power enough,
And in a captive chariot into Rouen
Bring him our prisoner.
Constable of France.
This becomes the great.
Sorry am I his numbers are so few,
His soldiers sick and famish’d in their march,
For I am sure, when he shall see our army,
He’ll drop his heart into the sink of fear
And for achievement offer us his ransom
Henry V, Act III, Scene 5

The Apostles do not come well out of the Gospels. They seem to have a near perfect ability to misunderstand or not comprehend Jesus. It is tempting to dismiss them as unusually dense or at least woefully ignorant. It does not help much if we remember that we know the end of the story and they didn’t, that we have the benefit of the reflections on Jesus and His mission in the Epistles and two thousand years of Christian thought and they had to make do with very much less. The reason this is not helpful is because it is a purely intellectual exercise on our part. Most readers of the Gospels, Christian or not, are emotionally invested in Jesus, often to a great degree, and it hurts us when we see Him desperately trying and usually failing to make those closest to Him understand who He is and what He is doing. That emotional wound, that empathy which we feel, cannot really be touched simply by engaging in the mental exercise of adding up the things which the Apostles could have known and could have understood and comparing it with what our Lord was asking them to know and understand. Emotional wounds need to be treated with emotional medicines.

(enter Shakespeare)
One way of reading Scripture is to immerse oneself in it imaginatively. If we try to see the events unfolding before us not through the eyes and with the feelings of a 21st century person but as near as we can manage it with the feelings of the historical participants then our perspective will change. For most of us it will not be possible really to enter into the thought processes of the Apostles, the holy women or the Pharisees because their thinking was dominated by a framework of assumptions and experiences that only professional historians could really reproduce. Their feelings, however, would be akin to ones that we ourselves are familiar with because the lapse of two thousand years has effected no change in the human emotional range whatever it may have done to the world of ideas. In this context Act III, scene 5 of Henry V becomes a useful tool. Why? to read more click here