sidebar-stacked-right
Today is an interdenominational Jericho March at a local abortion clinic in our city.
This “medical facility” has been closed for about a month now for remodeling.
Please join us in prayer that the doctors, nurses and staff have a change of heart.
That the scales are removed from their eyes.
That they have a conviction of what they’re doing brings death
to an innocent unborn baby and great harm to the mother.
“We know that all things work for good for those who love God, who are called according to his purpose.”   Romans 8:28
Blessings,
Noreen
A few days before leaving for the 39th annual March for Life 2012, I thought of this phrase….

Why do we March for L.I.F.E.?
Life Is For Everyone!

Last year my family and I attended our first March for Life and I blogged about this incredible experience HERE.  This year, my daughter, friends, and I joined a parish in Rocky Mount, NC and traveled to our second march on buses.  There were three large buses filled with 150 people from Rocky Mount and surrounding areas.

We left early Monday morning, January 23, 2012 at 6:00 AM from Rocky Mount, NC to our nation’s Capitol for the annual March for Life rally to protest the 39th anniversary of Roe v. Wade and the legalization of abortion. Our first stop when we arrived was the Basilica of the National Shrine of the Immaculate Conception. 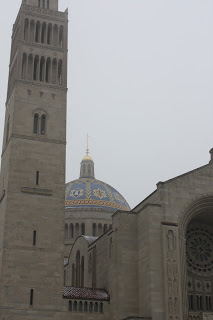 As soon as we got off the bus, I had a friend snap this picture of my daughter and me standing with Fr. Tim Meares, priest of Our Lady of Perpetual Help in Rocky Mount.  Fr. Meares has been on many marches and we were all blessed with this holy priest’s presence during our trip. 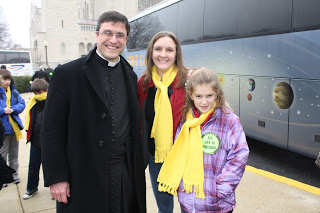 Here is most of our group with all the bright yellow scarves: 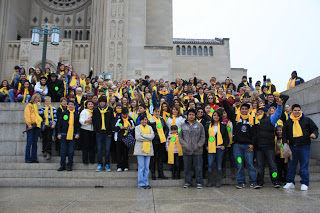 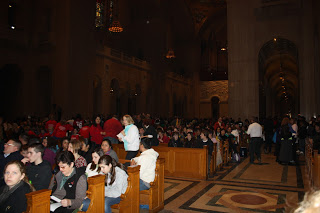 Each year there is a Holy Mass for Life for all the N.C. pro-lifers present at the march.  It is just so beautiful to see the many priests and seminarians and our two bishops from the Raleigh and Charlotte Diocese celebrate Mass with the packed church. 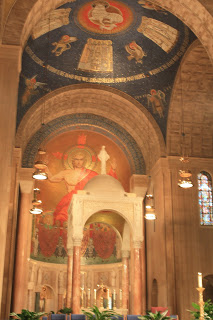 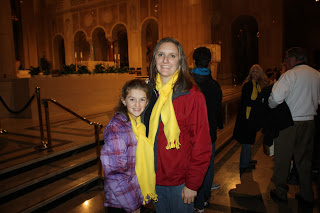 Although I missed celebrating this march with my husband and other three children, it was very special to have my daughter with me to share such a powerful event.  It’s never too early to teach our children that life, no matter how small, is precious and sacred.

Down in the Crypt Church of the Basilica, I found Cameron Smith’s artwork (No relation to me). Cameron and his family are in our homeschool group and are dear friends.   He has incredible God- given talent and he did a painting on marble of Saint Maron and and Our Lady of Lebanon for the Maronite chapel and these beautiful masterpieces are located in one of the many side altars.  You can visit Cameron’s website HERE to see his other beautiful prints to view/purchase. 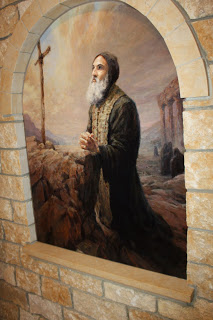 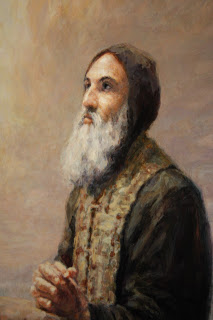 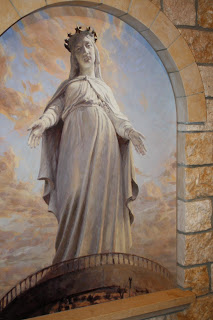 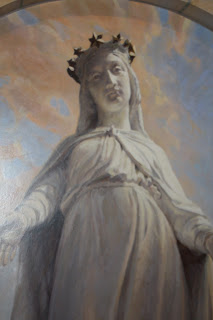 The weatherman called for 90% chance of rain in the afternoon and after we left the Basilica it was drizzling, but then it stopped during the march.  The sky was gray and gloomy, but the spirits were high which made the day much brighter for sure.

After our group gathered at the Navy Memorial, we marched with an estimated 300,000-500,000 pro-lifers. It’s hard to know the exact number, but based on previous year’s estimations, I’m guessing this many people might have attended this year’s march.   There were men, women, and children from all ages, races, religions, and walks of life joining together to stand for life one step and prayer at a time.  It was breathtaking, exhilarating, and powerful to walk among the masses.  There was a sea of love, as one friend put it.  There was no anger, fear, or hate in the crowds.  Rather, there was a feeling of security, hope, peace, joy, and love and all the young people present gave me hope for our future.
Here is a video clip I took while walking in the march.  The young people are shouting, “We love babies, yes we do, we love babies, how ’bout you!”
Here is the video.

Speaking of our young generation, here are a few beautiful teens that I know from my homeschool group.  They and about 13 others came to the march and are part of our local Teens for Life group. Not only are they shining witnesses for life, but they also love spreading the message of life with bright smiles and duct tape!  Awesome! 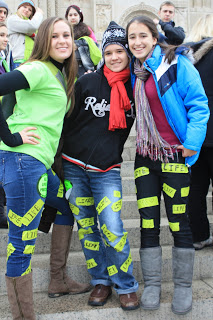 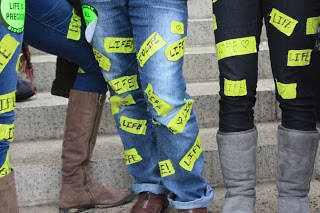 Like last year, I love all the signs that float through the massive crowds  Here is a slideshow of some signs that I saw: 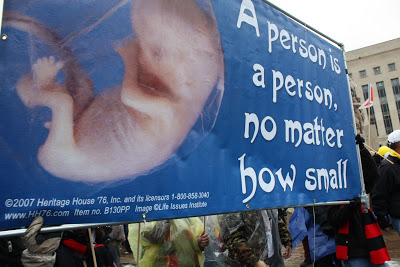 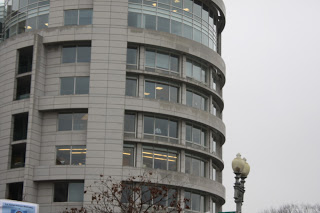 At one point while we were walking we noticed two businessmen watching from high above the crowds from their office windows.  We were waving at them to get their attention and they waved back. I wanted to be up there to witness from their vantage point the hundreds of thousands marching.   I was wondering what they were thinking?  Were they encouraged as pro-lifers themselves?  Maybe they were in awe of the crowd, despite being pro-choice?  Maybe they were wondering how the news media could continue to miss this BIG story about March for Life each year?  Maybe they were amazed that so many people could come together peacefully?  Whatever they were thinking or feeling, we as pro-lifers might have planted seeds in their hearts to always defend life!

Here are photos of the crowds.  Like last year’s march, I never saw the beginning or the end of the march and I hear the numbers who attend gets higher and higher! 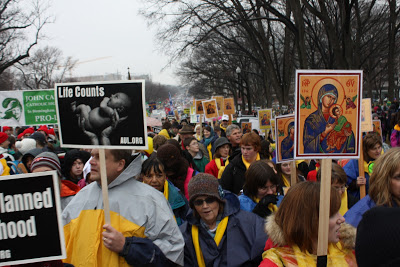 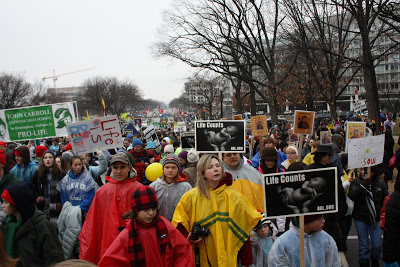 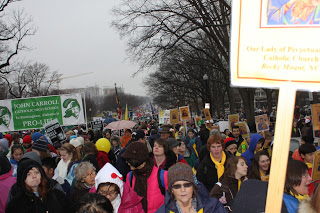 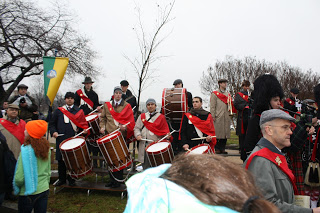 One of my friends from our group had this to say about the march. “We joined in the march at 2:00 PM. It was shuffle, shuffle, stop. Repeat. On the hill itself, it was so crowded that we had to make full stops about 7 times. From the bottom of the hill to the top where the route turns on First Street to the Supreme Court, it was packed. I didn’t see any gaps. We were like sardines. If you had claustrophobia, you would’ve felt it at the National Archives. The official end of the March came at about 4 PM with the fife and drum and bagpipe corps of the American Society for the Defense of Tradition, Family, and Property, who run the America Needs Fatima campaign, marching behind Our Lady of Fatima statue. They always bring up the rear.” 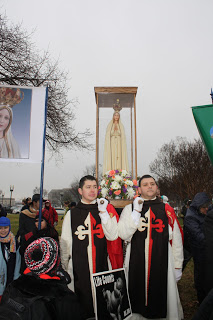 We stopped at the Congressional Building for a small reception and to listen to our NC Senator, Richard Burr, speak.  We also listened to Congresswoman Renee Ellmers.  Both gave the audience words of encouragement to keep marching on to defend life. 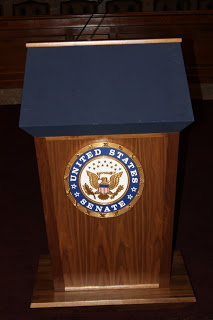 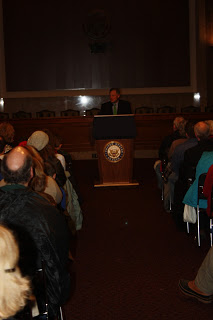 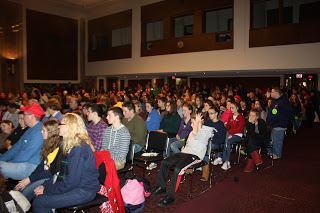 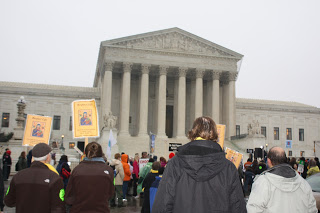 After we left the Senate building, we headed toward the Supreme Court where we listened to women tell their stories about how they had an abortion and how much they have suffered physically, mentally, physcologically, emotionally, and spiritually from their decision.  It was heartbreaking to hear their stories, but they share their stories to help others through a project called Silent No More Awareness Campaign. 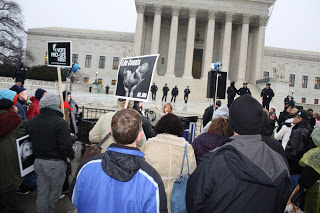 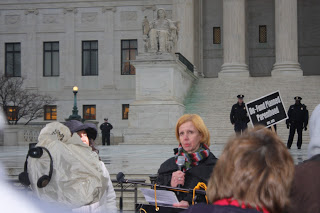 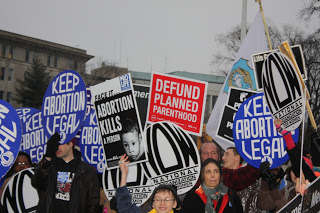 A few feet from where the women were speaking there were different signs that were being held up.  It didn’t even register in my mind that these signs were not like the ones I was blessed to see all day during the march.  No, seeing these signs made me sad…because these women’s stories were filled with pain, grief, sadness, confusion and even hope, but only a few feet away pro-abortion signs were being held up proudly.   I snapped a picture of signs that read “Keep Abortion Legal” and the pro-life signs that read “Defund Planned Parenthood” and “Face It….Abortion Kills a Person”.  My 11 year old daughter didn’t understand why anyone would want to keep abortion legalized.  She kept asking me “why?”  I told her I don’t understand it myself, but we need to keep standing up for life and praying for conversions so that all people will see that each human person is made in the image and likeness of God and each life, no matter how small, no matter the circumstance, is sacred and valuable.

I conclude this year’s March for Life with this video and quotes by Mother Teresa:

“America needs no words from me to see how your decision in Roe v. Wade has deformed a great nation. The so-called right to abortion has pitted mothers against their children and women against men. It has sown violence and discord at the heart of the most intimate human relationships. It has aggravated the derogation of the father’s role in an increasingly fatherless society. It has portrayed the greatest of gifts — a child — as a competitor, an intrusion, and an inconvenience. It has nominally accorded mothers unfettered dominion over the independent lives of their physically dependent sons and daughters”
And, in granting this unconscionable power, it has exposed many women to unjust and selfish demands from their husbands or other sexual partners. Human rights are not a privilege conferred by government. They are every human being’s entitlement by virtue of his humanity. The right to life does not depend, and must not be declared to be contingent, on the pleasure of anyone else, not even a parent or a sovereign.” (Mother Theresa — “Notable and Quotable,” Wall Street Journal, 2/25/94, p. A14)
“But I feel that the greatest destroyer of peace today is abortion, because it is a war against the child – a direct killing of the innocent child – murder by the mother herself. And if we accept that a mother can kill even her own child, how can we tell other people not to kill one another? How do we persuade a woman not to have an abortion? As always, we must persuade her with love, and we remind ourselves that love means to be willing to give until it hurts. Jesus gave even his life to love us. So the mother who is thinking of abortion, should be helped to love – that is, to give until it hurts her plans, or her free time, to respect the life of her child. The father of that child, whoever he is, must also give until it hurts. By abortion, the mother does not learn to love, but kills even her own child to solve her problems. And by abortion, the father is told that he does not have to take any responsibility at all for the child he has brought into the world. That father is likely to put other women into the same trouble. So abortion just leads to more abortion. Any country that accepts abortion is not teaching the people to love, but to use any violence to get what they want. That is why the greatest destroyer of love and peace is abortion. ”
“Please don’t kill the child. I want the child. Please give me the child. I am willing to accept any child who would be aborted, and to give that child to a married couple who will love the child, and be loved by the child. From our children’s home in Calcutta alone, we have saved over 3,000 children from abortions. These children have brought such love and joy to their adopting parents, and have grown up so full of love and joy!”
February 1997 – National Prayer Breakfast in Washington attended by the President and the First Lady. “What is taking place in America,” she said, “is a war against the child. And if we accept that the mother can kill her own child, how can we tell other people not to kill one another.”
“Any country that accepts abortion, is not teaching its people to love, but to use any violence to get what it wants.”
“It is a poverty to decide that a child must die so that you may live as you wish.”

Why do we March for L.I.F.E.?
because Life Is For Everyone!