Evangelium Vitae and a Prolife Novena

On March 25th, 1995 Pope John Paul II gave us the beautifully rich and prolife encyclical, Evangelium Vitae. This year we will be celebrating the 20th anniversary on the Feast of the Annunciation. What a fitting feast day to celebrate life, as we call the mind Mary’s ‘yes’ to becoming the Mother of God!

A special Novena has begun – with nine individual petitions, the Prayer to our Lady written by Pope John Paul II (now Saint John Paul II), and a relevant excerpt from Evangelium Vitae.

Won’t you join this worldwide effort and pray these simple Novena prayers with us? Participants range from the United States all the way to our friends ‘down under’ in Australia! For more information you can read a bit of history at Evangelium Vitae: 20th Anniversary Novena – Catholic Stand. 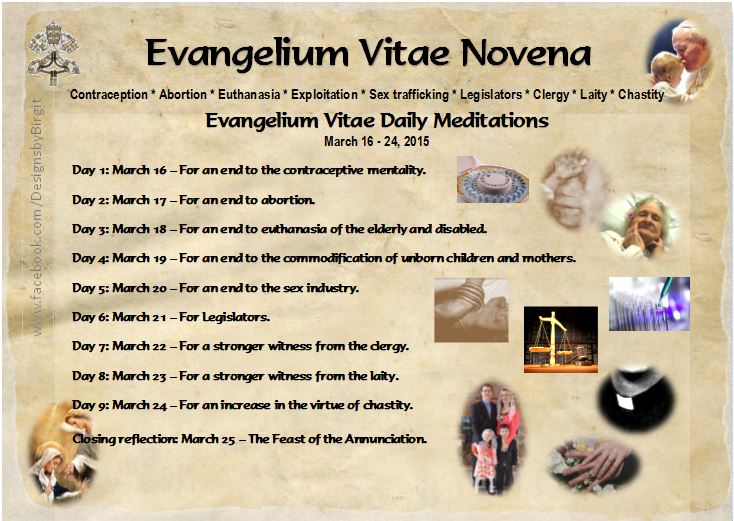 A daily post explaining the petition and including all of the relevant prayers can be found on Designs by Birgit. There is also a Facebook group for the Evangelium Vitae Anniversary Novena. I hope you’ll join us and invite your friends and family to pray for an increase in the respect for all life – from fertilization until natural death.

At his funeral in St. Peter’s Square in 2005, there were prolonged chants from the multitude gathered for “Santo Subito” (Sainthood Now!).  On April 27, 2014, the Catholic Church  celebrated the canonization of the 264th pontiff Pope St. John Paul II (born Karol Józef Wojtyła) along with the 262nd Vicar of Christ Pope St. John XXIII (ne Angelo Giuseppe Roncalli) in St. Peter’s Square in Vatican City.
Some Protestants bristle at the notion that the Church “makes” saints, as nobody (but Christ) is perfect and that we are all supposed to be called to sainthood in our Christian identity.  Certainly our baptism marks us as part of the Lord’s people and calls us to holiness.  The Catholic Church can recognize, based on investigation and guidance from the Holy Spirit,  that a person is already a saint, definitely in heaven and having led a life of great holiness that is worthy of veneration by the faithful.  Canonized saints are important examples to the faithful of how to live a heroic (not perfect) Christian life.
Pope John Paul II was a remarkable man who wore many hats in his life. He was a Laborer, Thespian, Playwright, Patriot, Priest,  Philologist, Philosopher, Pilgrim, Bishop, Theologian, Sportsman, Scholar, Statesman and Vicar of Christ.  The cause for John Paul II’s canonization however  is not premised on doctrinal dissertations, academic accolades or even geopolitical accomplishments. It is about how John Paul II lived his life to reflect the Christian virtue which still touches the faithful today.
After several years of investigation led by postulator Monsignor Slawomir Oder, the Vatican’s Congregation for the Causes of Saints recommended Servant of God John Paul II’s heroic virtue to the Pope. On December 19, 2009, Pope Benedict XVI proclaimed John Paul II as “Venerable”.  The Church normally requires that one miracle is attributable to intercessions of a Venerable, but the Vatican only investigates possible miracles after a candidate is declared Venerable. These miracles are almost always miraculous medical cures as these are the easiest to verify.

Sister Marie Simon Pierre, a nun from the order of Little Sisters of the Catholic Motherhood in Aix au Province, France, had suffered with Parkinson’s Disease, like John Paul II, for four years. She intensely prayed along with her community for healing through the intercession of John Paul II only two months after John Paul II’s death.  Doctors determined that Sr. Simon Pierre’s neurological symptoms had disappeared inexplicably.   This was deemed John Paul II’s first miracle in 2011.

In April 2011, Floribeth Mora, a 50 year old Costa Rican grandmother, was diagnosed with an inoperable brain aneurysm  and was sent home to die.  But on the day of John Paul II’s beatification, Mora saw a photograph of John Paul II and the photograph spoke to her saying “Get up” and “Be not afraid”.  Remarkably, her aneurysm disappeared that same day. Neuro-surgeons in Rome could not medically explain the disappearance.  This miracle satisfied the Congregation for the Causes of Saints in the Vatican.

The date of the canonization may well have been chosen because it was the 2nd Sunday of Easter, which Pope John Paul II instituted during his Papacy as “Divine Mercy Sunday”, due to his Devotion to St. Faustina Kowalska (1905-1938).  The vigil mass of the feast of Divine Mercy had just been celebrated at John Paul II’s bedside when he fell into a coma and soon after died.

The date of John Paul II’s canonization also occurs on National Holocaust Rememberance Day in Israel and during the March of the Living where people  gather in in  Krakow,  Wojtyła’s home for 40 years, to march between the Nazi death camps of  Auschwitz to Birkenau to remember the Holocaust.  John Paul II had strong connections with the Jewish community in his childhood home off Wadowice, where ¼  of the town’s 8,000 residents were eradicated for anti-Semitic aspirations of Nazi racial purity.  These events strongly influenced John Paul II’s weltanschauung, since during his pontificate, John Paul II made great strives to acknowledge the sin of anti-semitism, especially in the Holocaust, and to strengthen the Church’s relations with the Jewish Community. In May 1998, Pope St. John Paul II gave a formal apology about Catholic shortcomings in the Holocaust in the proclamation “We Remember: A Reflection of the Shoah”.

Then Cardinal Karol Wojtyła was elected Pontiff in October 1977 during the Year of Three Popes.  While Pope John Paul II was the first non-Italian pope in 454 years and was from a nation behind the Iron Curtain, he was chosen because of his theology.  John Paul II chose as his papal motto “Totus Tuus”, which reflected his Reflected his personal consecration to Mary which was based on the spiritual approach of St. Louis de Montfort (1673-1716)—“Totus tuus ego sum, et omnia mea tua sunt” (“I am all yours, and all that I have is yours”).  In Crossing the Threshold of Hope,  he explained that the “Totus Tuus” motto expressed the understanding that he “[c]ould not exclude the Lord’s Mother from my life without neglecting the will of God-Trinity”.  Polish born composer Henryk Gorecki (1933-2010) wrote the choral piece “TotusTuus” in honor of Pope John Paul II’s 3rd visit to Poland in 1987.
From the start of his Petrine ministry until his eventual death from Parkinson’s Disease 26 ½ years later, John Paul II’s message to the faithful was the Lucan exhortation “Be not afraid”.   In fact, John Paul II uttered the phrase three times during his homily at the Papal Inauguration.  This message “Be not afraid… open the door wide to Christ” was chosen as the slogan for his beatification.

It was the same message that he brought when he first visited his homeland of Poland in June 1979.  The documentary Nine Days That Changed the World showed the power that John Paul II message of “Be not afraid” had with the Polish people to instill the dignity of the individual to live out their faith and, with the guidance of the Holy Spirit, renew the face of the Earth and their land.

The  millions of Poles who flocked to their favorite son’s first pilgrimage back to his homeland showed that the faithful were not alone in that officially atheistic state and served as a real retort to Stalin’s taunt of “The Pope! How man divisions does he got?”  Both Lech Walesa, the piously Catholic worker who lead the Solidarity movement (and eventually became Poland’s President), and Vaclav Havel, the less spiritual leader of a free Czechoslovakia, credit the fall of the Iron Curtain to the message “Be not afraid” embodied in John Paul II’s 1st visit to Poland.
On May 13, 1981, Pope John Paul II was shot  four times at close range and critically wounded in St. Peter’s Square by Mehmet Ali Ağca, a trained Turkish gunman. Many belief that this assassination attempt was a hit job coordinated by the Bulgarian Secret Police with the complicity of the Kremlin.  Yet less than two and a half years later, John Paul II met with Mehmet Ali Ağca and forgave the gunman on Christmas, 1983.
Pope St . John Paul II was convinced that Our Lady of Fatima kept him alive during the ordeal where he lost 3/4ths of his blood. The Third Secret of our Lady of Fatima can be seen as predicting the assassination attempt on the Pope. The John Paul II’s faith filled connection between his assassination attempt and the visions of Fatima that a bullet from his wounds now tops the golden finery of the Our Lady of Fatima processional statue.
One of the hallmarks of Pope St. John Paul II’s reign was being a Pilgrim as Vicar of Christ to proclaim Jesus as the Redeemer of Humanity to all the Earth. Frankly, he came pretty close to covering it all.  It is speculated that the curia spent about a fourth of their time planning for and executing his 104 foreign trips to 125 countries which totaled 725,000 miles.
[***]

At the behest of Pope St. John Paul II, World Youth Days were held every couple of years at rotating international locations. Skeptics certainly questioned in disengaged youth would care about such events, but the youth loved to rally around the Pope and open themselves to the new evangelization.  The vitality of  World Youth Day tradition has not subsided in the loss of John Paul II.  These large conclaves of young people meeting to renew their faithful inclinations echoes how John Paul II loved to channel the energy of crowds in a positive manner to allow people to feel connected in a vibrant and visceral way.

While Pope Benedict XVI did not formally recognize John Paul II as a martyr in his beatification mass, many feel that the manner in which John Paul II lived with his debilitating disease and how he died with dignity in the Vatican was exemplary.  His final words were uttered in Polish “Allow me to depart to the house of the Father”.  John Paul II had run the good race and was not afraid to go home to the Father by extending his life through extraordinary medical procedures for terminal illness.
In addition, Pope St. John Paul II left a large body of theology during his long pontificate, which will have a long lasting influence upon the Church.  [***]  Many feel that Pope St. John Paul II will be best remembered for his “Theology of the Body”, which was based on 129 lectures from his Wednesday audiences, which focused on Christian marriage, celibacy and virginity, contraception and the sacrament of marriage.
In  Washington, DC, the new seminary  has dedicated to the now Pope St. John Paul II. The John Paul II Cultural Center in Washington DC has been converted into a Church and Shrine and will be rechristened the “St. John Paul II Shrine”.
Pope St. John Paul II’s example of the new evangelization, his example of forgiveness and fearlessness for standing up for the faith certainly gives the model to “Be Not Afraid” in our own paths toward being part of the Community of Saints.