This is the week for keeping watch with Jesus in a special way. Although God calls us to spend time with Him in prayer daily, we rightly feel that we should spend extra time with Him during Holy Week. But how should we go about it?

When I was a teenager, my family started a tradition of an all-night prayer vigil on Holy Thursday. Beginning at 10 p.m., my parents, siblings, and I took turns praying in one or two one-hour slots for the next eight hours. I loved offering this extra sacrifice to Jesus, this extra sign of love. Jesus would not be alone in the Garden of Gethsemane if I could help it.

After I graduated from college, I spent two years as a lay missionary in Japan, teaching English to support the evangelization work of an American priest. During spring break of the first year, my roommate Mary Beth and I traveled to the island of Kyushu. We planned to be in Nagasaki for Easter.

On Holy Thursday we were in the resort town of Unzen. Known for its hot springs, in which the Japanese bathe for health, Unzen is also the site of mass martyrdoms in the 17th century. In one of the most heinous instances of torture in history,  Japanese officials hung Catholics upside-down to slowly roast over the hot springs. They punctured holes in the martyrs’ foreheads, so that the rush of blood to their heads would not kill them prematurely.

Mount St. Sepulchre in Washington, DC is a Franciscan Monastery of the Holy Land in America. The Church itself neo-Byzantine design by Roman architect Aristide Leonari in 1899.  The church looks akin to  St. Sophia (Hagia  Sophia) in Constantinople (Istanbul).

The interior of the church resembles a five fold Crusader Cross of Jerusalem. The large bronze baldachin is is supported by columns which depicts the twelve Apostles. The interior is decorated with the Ave Maria and scenes from the life of Mary.

The Friary is the home of Franciscan Commissariat in the nation’s capital, and they continue their 800 year tradition of supporting the Holy Land. Part of the charism of the Commissariat seems to be a special celebration of Passiontide.

The Tenebrae service which is celebrated on Spy Wednesday is is resplendent in faith and history, as is incorporates a cappella medieval pieces sung by the Suspicious Cheese Lords (Suscipe Domine Queso).

While they are a consummate choir, the Suspicious Cheese Lords need to practice their polyphonic songs in situ at the Franciscan Monastery.

The Suspicious Cheese Lords in rehearsal for the Tenebrae Service.

Lighting the Candelabra for the Tenebrae Service.

Extinguishing the candles during the Tenebrae Service.

The closing of the Tenebrae service is marked by a retreat of the single candle into the crypt.  As the vault to the catacombs is slammed, it sets off an unnerving Strepitus, meant to symbolize the earth convulsing at the death of the the Messiah, Jesus the Christ.

I just posted a HOLY WEEK Link-Up as part of the Fiestas de Enlaces.
Here is the Holy Week Link-Up Announcement. 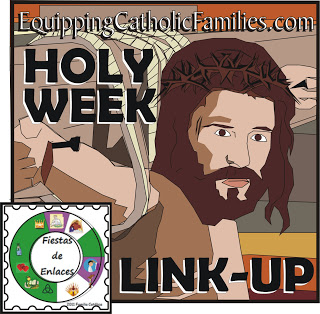 The Holy Week Link-Up is on the same page as the
What are you doing for Lent? Link-Up…

and incidentally…there is still time to add your Lenten posts, reflections and activities.

Help us re-focus our Lent with your awesome ideas!