My ten month old grandson is a happy, quick, engaging little fellow who was born with the plates of his skull fused together prematurely. As a result, he is facing major surgery to cut the plates and reshape his head which has grown lopsided. Emmett’s surgery is on Wednesday Nov. 19 at 9am Eastern Standard Time. The surgery will take between 5-7 hours, but it could take up to 10 hours.
Details of the surgery are as follows: an incision is made from ear to ear, the skull is removed from the orbital bone to the centre of the head. After the neurosurgeon removes a piece of his skull that has fuse prematurely, a plastic surgeon will reshape the skull.  Then the surgeon will put it  back together using plates and screws which are made of a dissoluble substance. They use between 150-200 screws. There is a 50/50 chance Emmett will need a blood transfusion.   continue reading 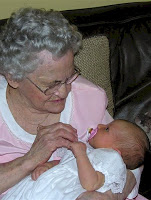 Priests for Life has been the source of Pro-life materials  for years. They coincide with the Church calendar and ‘contain three elements: a one-paragraph bulletin insert, General Intercessions, and suggestions for drawing pro-life themes out of the Sunday reading for the homily’. I will share all three elements every Sunday in an effort help us all think with a pro-life heart.

The Priests for Life pro-life materials for Sunday, February, 12, 2012 go to Designs by Birgit