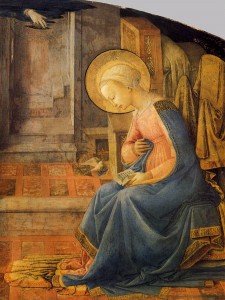 But she, not finding where her foot might rest, returned to him into the ark: for the waters were upon the whole earth: and he put forth his hand, and caught her, and brought her into the ark. And having waited yet seven other days, he again sent forth the dove out of the ark. And she came to him in the evening, carrying a bough of an olive tree, with green leaves, in her mouth. Noe therefore understood that the waters were ceased upon the earth. And he stayed yet other seven days: and he sent forth the dove, which returned not any more unto him.
Genesis 8:8-12

The Coptic Christians, whose ancient communities are enduring a prolonged martyrdom in the Middle East, have long given the Blessed Virgin the title of The Beautiful Dove because they see a type or figure of our Lady in this story from Genesis. In common with all of Christendom prior to the time of Luther the Copts find the New Testament present within the Old. In its pages, the stories, the people, the artefacts used, the sacrifices offered and so on everything which Jesus and the Apostles make plain can be seen under a veil as it were. Christians have long delighted in piercing that veil and in unfolding into plain sight the truths which we can now see thanks to the revelation of Christ and the faith passed on through the Apostles. The three journeys of the dove are types of, respectively, the girlhood of Mary, her role as Mother of God and her Assumption into heaven.

The earth covered in waters represents a world drowned in narrow materialism, sin and self-regard. From the moment of her Immaculate Conception our Lady became a pilgrim: in this world but not of it. Noah and his family in the Ark stand for the anawim the humble righteous ones looking with hope for the coming kingdom which would dry up the waters and flood the world instead with the spirit of love and devotion. Mary became in a special way the representative and ambassador of the anawim. She flew forth across the waters filled with love and hope but could find nowhere where here foot might rest. She was sustained only by the wings of faith and the winds of the spirit…click here to read more