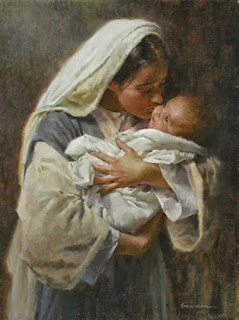 Even though this was a public hospital, in the maternity unit, everyone fought fiercely for the life of every unborn child. Whether they were cognizant of the fact or not, these doctors and nurses embodied the teaching of the Church.
For you created my inmost being;
You knit me together in my mother’s womb.
I praise you because I am fearfully and wonderfully made;
Your works are wonderful,
I know that full well. -Psalm 139:13-14-
Pregnant with my seventh child, I was bedridden in the high-risk, neo-natal wing of the maternity ward for a week. I was waiting for a housekeeper to come  run my home and help tend my six children. Although I faced six months of bed rest, that one week gave me perspective and kept me from sinking into self-pity. Two other women in my room were desperate to keep their babies in utero and finally become mothers. One of the two had suffered five miscarriages. She was stuck in a ward room for months, only going home after the birth of her baby.
Secretly we all feared that we would lose our babies. Suddenly our fears materialized as a high-risk woman’s baby died in her womb. That poor woman had to endure an induction and labour for hours, only to push out a dead baby. The pain in that wing of the hospital was tangible. Tears ran down women’s’ faces as they grieved with their neighbour. It did not matter that none of us had even glimpsed her face. Nurses as well as patients mourned for a sister who was loosing her newborn. I became so nauseated with the awful vibes that pressed in on me that I ended up retching over the side of my bed with ice packs on my head to relieve a migraine.
Thank God, after the delivery, they moved this mother to the maternity wing where she was given a free, private room. Nurses as well as patients sighed with relief when the nurses told us that the hospital understood the need to shelter grieving mothers from others who cuddled and nursed their new babies.
Even though this was a public hospital, in the maternity unit, everyone fought fiercely for the life of every unborn child. Whether they were cognizant of the fact or not, these doctors and nurses embodied the teaching of the Church.
Human life must be respected and protected absolutely from the moment of conception. From the first moment of his existence, a human being must be recognized as having the rights of a person – among which is the inviolable right of every innocent being to life.
Since the first century the Church has affirmed the moral evil of every procured abortion. This teaching has not changed and remains unchangeable. Direct abortion, that is to say, abortion willed either as an end or a means, is gravely contrary to the moral law:
You shall not kill the embryo by abortion and shall not cause the newborn to perish.
God, the Lord of life, has entrusted to men the noble mission of safeguarding life, and men must carry it out in a manner worthy of themselves. Life must be protected with the utmost care from the moment of conception: abortion and infanticide are abominable crimes. CCC 2270-2271
My generous spirit petered out after a few weeks at home. My only outing was to a high-risk appointment every week. Church was even out of the question, so Michael brought home communion and the readings each Sunday. I remained in a prone position, eating while propped up on one elbow with my food cut into small pieces. The high-risk doctors let me use a regular toilet and have a quick shower every morning. In those days, we had one large, heavy T.V. in the living room, a black dial-up phone on the hall wall, no stereo system, no computer and the bedroom window was cloudy, so I could not look outside. In frustration I phoned my doctor one morning after my shower.
“But I don’t feel sick. I feel fine and my kids need me!” I wailed.
My usually laid back, jovial doctor explained my situation in graphic detail.
“You have a huge clot, 4-cm thick, 6-cm, wide from the top of your womb where the placenta tore down your entire right side. The last time this happened at the Civic was two years ago to a woman who had four kids at home. They both almost died. We had to call the Archbishop in to explain to her that it was more of a sin to her remaining children if she foolishly died along with her unborn child.
“Listen to me. Keep this image in your mind. Imagine that here is a gun pressed to your temple, cocked waiting only for the slightest movement to set it off. Lay in bed and do not move!”
Well that got my attention.
The hardest aspect to my forced “vacation” was letting go of control of how strange women cleaned my home, washed laundry and made meals. I endured terrible cooks and inept, lazy house cleaners but at least my kids could still lay down beside me as I read to them and helped with homework. It almost seemed orchestrated because God seemed to delight in my inactivity; He had ample time to teach me to let go, trust and to allow others to serve me.
The end result of my confinement was a beautiful baby girl with huge black eyes and black hair that stood straight up. She is now a gentle artist/philosopher whose dark eyes  still sparkle with life and joy, only one of the hundreds, why maybe thousands of young adults who owe their very existence to  ordinary nurses and doctors in maternity wings who fight for the lives of the unborn.
http://melaniejeanjuneau.wordpress.com/