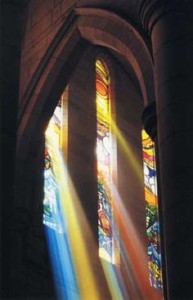 The declining sun lit up her sweet-sad smile, the folds of her blue mantle glowed softly. Below, the stone-flagged nave was dappled with multi-coloured shadows. For over a thousand years her delicate, fragile eyes had looked benignly on the people who passed backward and forward through her Son’s cathedral.
Many of these had scurried across the shaded space ignoring her. Others, half-aware of her presence and of her beauty had snatched hasty glances at her. Occasionally one or two individuals had stopped as if transfixed and had drunk their fill of the gifts of light which flowed through her and into the hearts of each woman or man who would accept them.
There was no one upon whom she did not smile; the empty headed and the wise, the ambitious and the contented, children of the pharisees, heirs of the Apostles. If the smile did not benefit each equally the fault lay not with the giver but with the recipient. People who will not be smiled upon will walk in a gloom of their own making.
Over that same thousand years too she had gazed upon the altar at the Eastern end of the nave. There the life, death and resurrection of her beloved Son had daily been made present in the midst of a mostly indifferent world. A spiritual truth become visible, like herself, under the veil of material forms. She did not weep at the sight, her weeping was done. Now her eyes were forever fixed on Him and would be though altar, window and cathedral should pass away into destruction….click here to read more