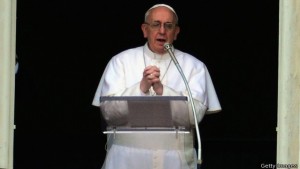 “We all know, from our communities, parishes and neighbourhoods, the bad brought to the Church and the scandal caused by those people who call themselves very Catholic, who frequently go to church, but then, in their daily lives, don’t take care of their families, speak ill of others, etc.”

From the inside looking out we might think it possible to be part time Christians. We can sometimes give ourselves a break from being quite so holy, from holding ourselves to quite such a high standard. Pope Francis in his remarks just quoted takes another view. He goes on to point out-

“This is that which Jesus condemns because this is a Christian ‘counter-witness.‘“ (Vatican Insider)

From the outside looking in everyone who knows us will consider that anything we do has the mark of ‘Christian’ about it.And when we publicly do things which are discreditable to ourselves we are bringing down scandal upon the Church. Quite literally in fact because the word ‘scandal’ means stumbling block and every time we bear a counter-witness to the Gospel we are putting a stumbling block in the way of others entering the Christian life.
Some of the things we do may be hidden or private but malicious gossip, ‘speaking ill of others’ as the Holy Father puts it, is always by its nature a public act. Very often it becomes more public than we intend since once it is put into circulation who knows where it will end or what damage it may do….click here to read more