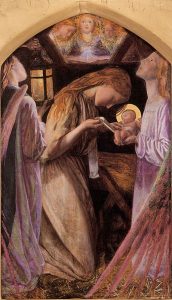 My school report was so bad that my eldest brother was commissioned with the task of teaching me to read. But when he could not even manage to teach me how to read the Beano, he resigned his commission and commended me to St Jude of hopeless cases. But even St Jude failed. It seems that in those days it was not only in school, but in heaven too, that dyslexia was unheard of. St Anthony was the only real friend that I had. Most people who now know about dyslexia still do not  realise how it affects your short term memory. That is where St Anthony came in. He might not have known much about dyslexia, but he was able to find the things that I was always losing. It was through him that I found St Francis of Assisi who may not have been dyslexic, but on his own admission he had little more than an elementary school education.   read on….. 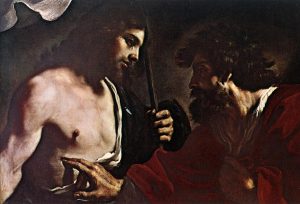 The Resurrection,  means that Jesus has been swept up out of the world of space and time in which he’d lived before, not to leave us alone, but to be closer to us than ever before, and as he prom­ised ‘even to the end of time.’ Before the Resurrection Jesus was limited by the physical body into which he had freely chosen to enter. His choice meant that he could only be in one place at a time, so meeting him would have been as difficult as meeting any major celebrity in our time. But that’s all changed now, because the same otherworldly power that raised him out of this world on the first Easter day enabled him to re-enter it on every day. So now he can enter into us, as he promised, so that he can make his home in us and we can make our home in him. In the words of St Augustine this means that – ‘He can be closer to us than we are to ourselves’. All this can be possible, not in some distant pipe dream, but here and now. That’s why de Caussade said that ‘The present moment contains far more than we have the capacity to receive, for it is full of infinite treasures’.  read on…… 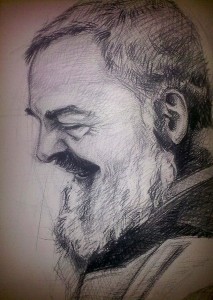 It was my mother who first taught me something so profound that I could never forget it. She said even though I may make my Morning Offering alone by the side of my bed or in bed I was not alone. Nor would I be alone even if I became a hermit and lived in the middle of some distant desert or a prisoner locked up in solitary confinement.  My prayer would always be made in with and through Jesus and so with all other living Christians wherever they were. She quoted the Our Father to press her point home. When we petition the Father we do not petition him for ourselves alone as the prayer makes abundantly clear – it is – ‘Give US this day our daily bread and forgive US our trespasses as WE forgive those who trespass against US and lead Us not into temptation, but deliver Us from evil Amen.’  She taught me further that praying to the Father in Jesus also means praying with all those who have died and who are now alive again in him. That means with Mary and Joseph, with St Peter and St Paul, St Dominic and St Francis, with St Catherine of Siena, St Teresa of Avila and St Thérèse of Lisieux, and all the other great saints and mystics too.  read on……. 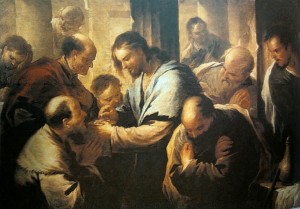 Many years ago I used to run a retreat and conference centre in London. As I had to run the place on a shoe string I tried to do as many of the odd jobs myself to save money. But I always had to call in the plumber when the drains were blocked. One day when he was having his lunch I went to look inside his tool box to see if I could find the tool that he used to save me calling him again. It was then that I saw these words written in Latin inside the lid. ‘All for the greater  honour and glory of God’ (Ad maiorem Dei gloriam). 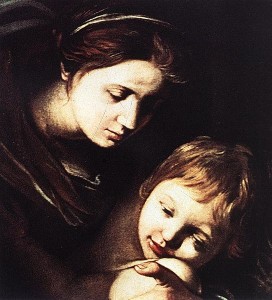 I saw my grandfather forty years after he died. I loved him with all my heart, not because he gave me toys, bought me ice creams or took me to the Fun Fair, but because he loved me so much. I was only eight years old when he died of a heart attack and I cried myself to sleep. The next day my mother told me that he loved me very especially, so much so that he made special plans for me and so I should always pray for him each day when I said my morning prayers. That’s why I felt so guilty when I saw him again forty years later.  read on 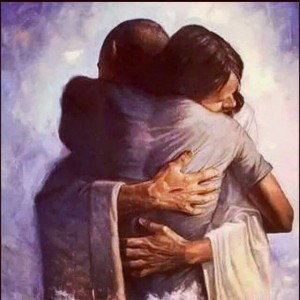 Before the swinging sixties, before Buddy Holly and Elvis Presley, and even before Bill Haley and the Comets had set these Isles throbbing with the sound of Rock ‘n’ Roll, I fell in love for the first time. I was only sixteen, but it was the real thing. My Juliet, who was so beautiful, so pure, so perfect in every way seemed utterly beyond me. How could she possibly feel even so much as a spark, to match the flame that set me alight with love for her? I simply couldn’t believe it possible. How could such a beautiful creature even want to look at a gauche beanpole like me, who hadn’t even grown out of pimples and into poetry?   read on …..

Prayer and My Personal Journey:  To mark the publication of my new website I would like to introduce you to my own personal spiritual journey, as I first learnt how to pray. I am only doing this so that you may learn from my failures more quickly that I did, and in the hope that what little I have learnt may be of some help to you on your journey. My first recollections of prayer were of kneeling at my bedside repeating the same set of petitions night after night. God bless Mummy and Daddy, my brothers, and all my aunts and uncles who were mentioned by name. It was only after my cousins were prayed for in order of age that my turn came. I was not taught to ask God to bless me as he was asked to bless everyone else, but to make me a good boy! Who wants to be a good boy?  I didn’t!  read on…..

I’m David Torkington, a Spiritual Theologian, Author and Speaker. I specialize in Prayer, Christian Spirituality and Mystical Theology. I write and speak predominantly about Prayer which I believe transforms us into Christ in this life, and enables us to share in something of the life and love that continually flows between Christ and his Father. I blog on http://www.davidtorkington.com where my podcasts can be found.

Many years ago when I used to run courses for school leavers, I used to begin by asking the boys and girls to tell me when they were last really happy. I remember one boy said that it was when he was fishing with his father, another when watching one of his favorite films, and yet another when he was playing football with his friends. One of the girls loved a day of retail therapy with her mother, another loved playing the piano, not for her exams, but for the sheer pleasure of it. Finally one girls said her happiest moments were spent on holiday with her boyfriend. Strangely enough it always used to take them a long time to see the common denominator – the reason why doing all these different things had given them all so much pleasure. For a greater or less period of time they had been so absorbed in something, or someone else, that they simply forgot about themselves. In the discussions that followed they usually came to the same conclusion, namely that, this happiness could be found and perpetuated more in loving someone else than in anything else.  read on

I’m David Torkington, a Spiritual Theologian, Author and Speaker. I specialize in Prayer, Christian Spirituality and Mystical Theology. I write and speak predominantly about Prayer which I believe transforms us into Christ in this life, and enables us to share in something of the life and love that continually flows between Christ and his Father. 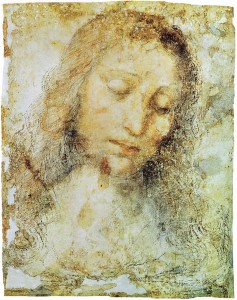