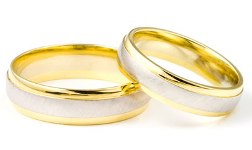 I recently read a lovely book called Come My Beloved: Inspiring Stories of Catholic Courtship. Since it was nearing our 9th wedding anniversary, this book got me reminiscing about my own courtship with my now husband. And, because reading/hearing about how God brings a couple together always inspires and uplifts me, I thought I’d share our story in the hopes that you will share yours. 😉

To begin this story, I have to back up a bit. As most of the people who know me, or who read this blog regularly, know that I spent a number of years discerning a religious vocation. I entered the convent after recently returning to the faith, firmly believing that I was called to religious life. Yet, there was an underlining <em>something</em>, a doubt that I suppressed. Like I said, I had only a couple years before returned to the faith and I wanted to do “something big” to show my love to the Lord. I thought it was to sacrifice family and become a religious sister.

Over the years, the signs that my vocation was marriage and to have a family firmly showed themselves, so during Holy Week 1999 I returned home. It was a bittersweet time. I loved the sisters but knew I had to live the vocation God was calling me to. I began to pray for a spouse.

My prayers weren’t answered until a couple of years later. I like to have a good time, but I’m no party girl. Doing the whole “club scene” or going to bars isn’t my thing. A couple of people tried to set me up but that wasn’t my thing, either. Then I started hearing stories of different couples who met online.

He promptly wrote back to inform me that he was currently discerning marriage with someone else. Okay, I thought, that door is closed. But, EVERY time I went to the singles site his profile would show up as a 100% match.

I started communicating with a couple other of people and tried to ignore Michael’s face every time he showed up. Several weeks later, I received a message from him. The relationship he was in didn’t work out and he wanted to know if we could chat. I said yes. 🙂

We started emailing through Ave Maria’s messaging system. We clicked right away in our emails and I had a good feeling about him. And the funny thing, the day after Michael and I started messaging the other guys I was communicating with dropped off the face of the earth. Literally. Our communications had been friendly and going well, but they instantly stopped writing, their profiles were gone, and I never heard from them again. It was as if they never existed!

A week after we started emailing, Michael asked if he could call me. I gave him my number and when he called we talked for over an hour. When we hung up, I said out loud, “This is the man I am going to marry.” I just knew. It was as if the Lord Himself was telling me this. Of course, I continued to pray about it, and every time I did, I had this “knowing.”

A week later, Michael asked me out on our first date. Our first date was May 1, 2002, the feast of St. Joseph the Worker. I have a strong devotion to St. Joseph, so I took this as a good sign. So much so, I was ‘dumb’ enough to let him pick me up from my apartment instead of meeting him at the restaurant!

What can I say? Our connection went deeper. We talked at the restaurant over two hours. Left the restaurant and we talked some more. A week later, we met each other’s parents. Six months later, on his birthday, Michael asked me to marry him.

His proposal was so special. He didn’t take me to a restaurant or to our favorite spot to propose. He took me to church. We went to the local church which had perpetual adoration. After we were praying for a while, he whispered to me to close my eyes. “Why? I don’t want to,” I said. “Just do it,” he said. So I closed my eyes and after a few seconds he told me to open them. He had placed the ring on the top edge of the pew in front of us. When I saw it I started trembling and I looked over at him. He knelt on the kneeler and said, “In the presence of God, Carol, will you marry me?” Obviously, I said yes. We prayed for a couple of more minutes before going to share the news with our families and continue to celebrate his birthday.

Nine months later we were married. Two years later we had Andrew. Like I said above, it hasn’t always been easy. But God has always been faithful. Both of us have grown and changed and we’ve been through some very rough times, BUT we trust in the Lord and know that the Lord has brought us together for His purpose and glory.

Your turn. How did the Lord bring you and your spouse together?

8 thoughts on “A Catholic Courtship Story”