Are your fears, doubts, and frustrations keeping you from intimacy with God?

How is your spiritual life going? Are you feeling frustrated with yourself? Are you distraught over your lack of progress? Do you keep falling into the same sins repeatedly?
Welcome to the human race!

No, I’m not trying to dismiss your concerns flippantly. Sometimes we just need a reminder that we are, after all, fallen. Adam’s sin affects us all. But here’s something you may not have realized:

Your sins do not shock God!

God is used to sinners. He has centuries of experience with them. He even came down from Heaven to live among them. Then people criticized Him for eating with sinners instead of the “righteous.” Yes, He loved to hang out with people like you and me.

Today I’m taking a break from talking about my book to return to the new project I’ve talked about a little before–making a spiritual growth plan for children of each temperament. First I’ll give a little overview of the four classic temperaments, tell you a little more about this project, then delve in deeper to help you with your choleric children. At the bottom you’ll find a special download to help you.

To figure out which temperament you have, ask yourself two questions:
Are my initial reactions to stimuli intense or dull?Do my impressions last or do they quickly fade?
Intense & lasting=choleric
Intense & fading=sanguine
Dull but lasting=melancholic
Dull and fading=phlegmatic

Over the past few weeks, we’ve been considering the sources of temptations and how to overcome them. We complete the series today by pondering how to flee temptations coming to us from the world.

“The world” is the society that delights in pleasure more than it delights in God.  The world entices us to join in the “fun.”

The world values pleasure, power, violence, wealth, fame, and comfort. It does not stop at tempting us. When we resist, it mocks and persecutes us. The world cannot stand to be rejected, having the fury of the proverbial scorned woman.

The world exalts the lowest things to the highest stature.  Its motto is “sex, drugs, and rock and roll.” It uses crude, vulgar, and blasphemous language without a second thought. It enshrines these values in book, magazines, TV, and movies. Ancient Rome’s coliseums and circuses exemplified the depths the world can sink to.

The first prayer that Jesus would have learnt from his mother, like all other Jewish children, was called the ‘Shema Israel, part act of faith, part prayer. Its first words proclaimed belief in the One God who should be loved ‘with the whole heart and mind and with one’s whole strength’. This embodied the essence of Jewish wisdom that Jesus had come to bring to perfection. The ‘Shema’ was the first prayer to be said on the Sabbath in the synagogue where it was also said three times a day to coincide with the sacrifices made in the Temple. For those who were unable to go to the Synagogue, it was said at work, in the fields, or at home, so that the whole day would be dedicated to the love of God.  more

We’ve been delving into temptations coming from the world, the flesh, and the Devil. Last week we discussed demonic temptations in detail. Today, we’ll examine temptations of the flesh and how to combat them.

We saw that people with melancholic or choleric temperaments tend to be more prone to the temptations that come directly from the Devil: pride, envy, and anger. Temptations of the flesh particularly plague the other two temperaments. More specifically, sanguines often struggle with gluttony and sins against chastity. Phlegmatics  struggle with sloth. (I will be writing more about the four classic temperaments throughout this year. I am creating a spiritual growth plan for you to use with your children of each temperament.)

As I have said before, the flesh can be the most relentless of the three sources of temptation. While the Devil may leave us alone for a time, and we can shut out the world to a certain extent, we can never get away from our own flesh. It remains with us every moment until the end of our life, but we can learn to resist it.
Gluttony, lust, and slothThe Catechism defines concupiscence as “the movement of the sensitive appetite contrary to the operation of the human reason… Concupiscence stems from the disobedience of the first sin. It unsettles man’s moral faculties and, without being in itself an offense, inclines man to commit sins” (2515).

Sanguines are easily moved by what they experience through their exterior senses. Thus, immodest entertainment might lead them into sexual sin. An all-you-can-eat buffet might tempt them towards gluttony. They might start using vulgar and blasphemous language if they listen to the wrong kind of music. 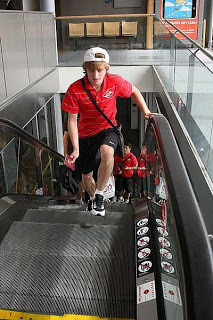 On the feast of Pentecost the Jews celebrated the day on which God had given the Law to Moses. However the first Pentecost after the Resurrection was the day on which God gave his new law – the law of love. This law was not primarily a list of rules and regulations like the laws that were given to Moses, but the same personal love that God had showered on Jesus. It was this love that enabled Jesus to practise to perfection the New Commandments that he taught his disciples. Namely, to Love God with their whole hearts and minds, and with their whole being, as he did, and to love others as he did too, and still does. read on

I am developing a spiritual growth plan for my three older children. (J is a little too young at age three!) Here are the areas I am considering:
TemperamentD is almost purely choleric, M is melancholic-phlegmatic, and C is primarily phlegmatic. (I haven’t completely figured him out yet–he’s eight and doesn’t know himself as well as the others do.)

Each of the four classical temperaments has a different perspective on life. Each has typical strengths and weaknesses. I seek to encourage my boys in their strengths and help them fight their weaknesses. I plan to do much of this through reading. Books will inspire them where lectures won’t.

Talents and interestsTemperament is only one part of personality. Each child has unique talents. For example, cholerics are bursting with energy, but one may be good at football and another at track.

Quiet and reserved M has a surprising acting ability.

How can my children use their gifts to glorify God? How can their talents help them choose a vocation and a career?

The authority of the Church, which was once accepted by the churched and respected by the secular, is in modern times no longer a means through which our belief system can be argued or upheld. This sad reality, while a cause for dismay, is also an opportunity for expansion of pedagogical and catechetical methods.

However, this expansion can not come at the price of the recognition that our beliefs stem not from our own intellect, as a sort of series of philosophical conclusions about how to live that were constructed by a group of 12 disciples some 2,000 years ago, but from the Church as guided by the Holy Spirit and led on earth by the Pope. As the noted communications mantra goes, “The medium is the message.”

This is why methods of teaching and conversion that do not ultimately stem from a belief in the magisterium, or teaching authority, of the Church are limited in scope. For example we as Catholics can point to Aristotle’s reason-based arguments for the existence of God, but we can not talk about God as Trinity without citing Christ’s teachings and the theology developed by the Church over thousands of years. The Church guards and passes on the deposit of faith given by Christ.

To believe in the authority of the Church, you see, is simultaneously to believe in Him who formed it, namely Christ. We must then ask ourselves rhetorically: why would Christ form the Church without equipping it with the means (councils, the Papacy, tradition, scripture, etc.) to construct correct dogma? And so to follow church authority means to believe in all of its teachings on faith and morals. This does not entail a blind faith that accepts a series of teachings simply because “Father ‘John Smith’ said so.” In praying each week in the Creed that we “believe in one, holy, catholic and apostolic Church,” we are instead embracing theology arrived at via reason and based upon the premises of faith.